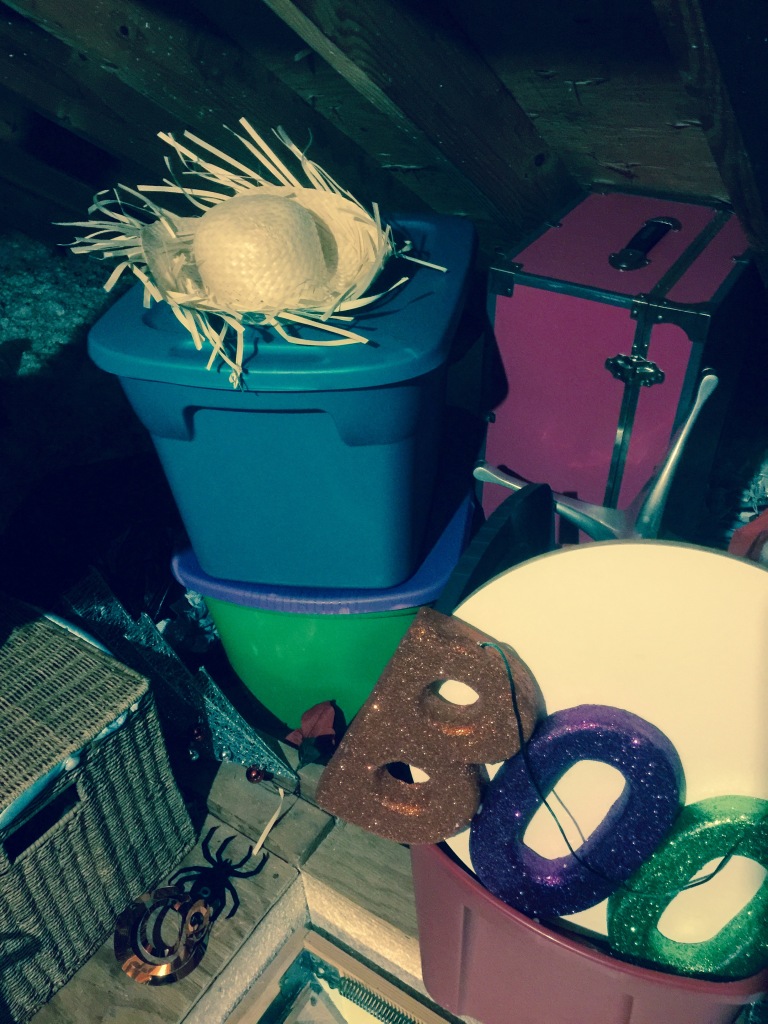 Last night my daughter and I were discussing the need to minimize the junk in our house because it is adding to the stress in our lives. This morning I randomly opened my devotional for the first time in a few days and read that Jesus said,”…life does not consist in an abundance of possessions.” (Luke 12:15) Okay! I get it God! Gonna need to have a giant yard sale or Salvation Army run soon!

How does the Holy Spirit speak to you? He speaks to me by repeating messages and signs over and over again. These messages can seem like coincidences when I’m not paying close attention, but sometimes the pattern is repeated so much that it is not statistically possible that it could be coincidence. It only took one “coincidence” this time, that I noticed anyway, but often the same subject is brought up repeatedly until I finally “get the hint.” The Holy Spirit is here with us as a kind of tour guide through life. We can wander off the path and ignore the guide, but then we won’t learn as much, and we might get lost. So, today I start clearing the stuff! And boy, is there a lot of it! It’s truly amazing how much one family can accumulate over the years!

My sister in law, Laura, used to tell me that “each thing we own owns a little piece of us.” I’m not sure if she thought of that herself, or if it came from one of the many thousands of books she’s read in her lifetime, but it’s true! It takes our time, our money, and our energy to maintain it all. Some of that time, money, and energy might be better spent on less tangible pursuits such as helping others, developing ourselves spiritually, or making memories with friends and family. If we stop and think about it, these intangibles are what life is really about after all. They are what we leave as legacy. Eventually the possessions turn to dust, but the influence of a well lived life can last for generations …just think of Mother Teresa or Gandhi. Please don’t misunderstand, I am not saying that it is wrong to have nice things, in fact, I believe that sometimes God blesses people with things so that they may bless others, or even just because He loves us and enjoys watching us enjoy things. King David of Israel was blessed with many possessions, and yet his legacy as a man after God’s own heart lives on today. What I’m saying is that we can have stuff, but LIFE is not about the stuff we have. In fact, sometimes the stuff can suck the life right out of us! It can paralyze us and keep us from moving in the direction that is most beneficial, the direction our tour guide, The Holy Spirit, is leading.

In this culture, sometimes we place so much emphasis on things that we neglect our spirits. This was made abundantly clear to me many years ago when I went on a medical mission to Honduras. It was not long after Hurricane Mitch had devastated that country. I traveled there believing that I would find a people who were also devastated because so many had lost what little they had before the storm. Instead, I found a people who ministered to my spirit as I ministered to their bodies. Many there had hope that I had not experienced here in this country. They had so few possessions, and yet, there was a joy that welled up within them and a lightness that was almost palpable. I often say that if I had not had a family here in the United States who needed me, I would still be there. So, what was the difference? What gave them that hope and lightness? To me, it was the lack of what I call “noise.” Noise is really anything that comes between us and God. It is the busy work we do that is unnecessary, its the constant chatter in our brains, it is the stress we put on ourselves to have more, or to do more, or to be more and it is a way of life here in the US. Trying to walk through life with too much of this noise is like trying to watch a TV program through static. Occasionally the picture will clear, but most of the time it’s difficult to see and hear. That static is irritating, it’s a nuisance. Much of the noise or static in our culture is caused by the need to accumulate stuff. Stuff gets in between ourselves and the still small voice within us that is God. It keeps us from noticing the signs that the Spirit gives us along the way, and so we blindly walk through life without our tour guide, trying to figure everything out on our own. We become oblivious to the noise eventually, but it is still there. That must be one reason why God tells us to be still and know that He is God. (Psalm 46:10) When we are running around amongst the stuff of life on earth, the noise is deafening in our ears and it can be difficult to hear Him, but when we are still and quiet and close out the things of this world, we can hear His voice again.

I loved watching Veggie Tales videos when my kids were little. Truth be told, I still watch them occasionally! For those of you who missed the Veggie Tales era, they are cartoons featuring two wise philosophers, Bob and Larry, who also happen to be vegetables. These videos teach moral and spiritual lessons to kids (and adults!). They are like phone apps for spiritual matters, “Got a problem? There’s a Veggie Tales for that!” One of my favorites is the Madam Blueberry episode. The episode begins with Madam Blueberry lamenting the fact that her stuff isn’t as good as the stuff of her neighbors. She sings of how blue and depressed she is. She thinks that she can find happiness at the Stuff Mart where she buys so many things that her house collapses. But all of those things don’t bring her happiness, in fact, they make her even more unhappy. In the end, she finally finds contentment in the park, where there are several children playing who are thankful for the simple things they have. It is then that Madam Blueberry realizes that things don’t make us happy, it is a thankful heart makes us happy. (http://youtu.be/8q1bNgk6TBU)

It may be over simplified for kids, but why do we adults always try to make things so difficult? Being thankful for what we have and who we are is contentment. Its hard to be content in the Stuff Mart. It is very easy to get lost and confused by all of the noise in there! But when we are quiet, when we get rid of all the junk around us, clear out all the noise, become still, and listen in closer, we find that we can be thankful and content with what we have and who we are, and then we can finally hear the voice of our Tour Guide clearly again.