July 1-2
Growing up, we almost always had hot dogs for Sunday afternoon lunch. You see, Mom never knew how many people would be there  on Sunday. If you came to church, especially if you were new, Vickie Hood would most likely ask you to come to lunch. If more people showed up than she planned, she’d just add another package of hot dogs to the pot and open another bag of chips. We rarely ate Sunday lunch without at least a few extra people, some old friends and some new friends, sitting around the table.
I thought about those Sundays when my mother’s friend, Ms. Margie, told me she was making taco salad for dinner and she hoped we’d make it to Ft Smith in time to eat. (Just add meat and open another bag of chips!) Ms. Margie and Mom are cut from the same cloth!

My parents met Margie and Tom Condren in October 2000 in the Myeloma Clinic at UAMS in Little Rock, Arkansas. Like my father, Mr Condren had Multiple Myeloma, and so my parents and the Condrens immediately bonded in the way that soldiers bond in battle. Dad called Mr C “Old Man” and Mr C called Dad “Fat Boy.” They were in the hospital together for their first stem cell transplants and walked through the pain, fear and sickness of cancer together for many years. Mr. Condren was my father’s dearest friend through the struggle. Both Old Man and Fat Boy have passed away now, but Ms. Margie and Mom have fought those battles together as well and so their friendship is eternal. It’s amazing to look back and see God’s hand in bringing people into our lives during times of need, isn’t it?

Through their relationship the families have become acquainted. I am so grateful to know Ms. Margie, her sister Doris, her daughter Lisa, and her grand-daughter McKinley and to count them as friends!

We did make it in time for dinner. Ms Doris, Lisa, and McKinley were there to greet us and we enjoyed each other’s company so much that we forgot to take a picture! Oh well, as Lisa said when I texted her later, “That just means ya’ll have to come back!” I’m sure we will!

Here’s a picture of Mom and the sisters on the last trip to Arkansas.
Eli and I had a great night’s sleep and the next morning I got some laundry done while Ms Margie and I talked. Later, as we were leaving, Ms Margie tried to send us on our way with half her pantry just like my mom would have done! Thanks Ms. Margie! Love you! 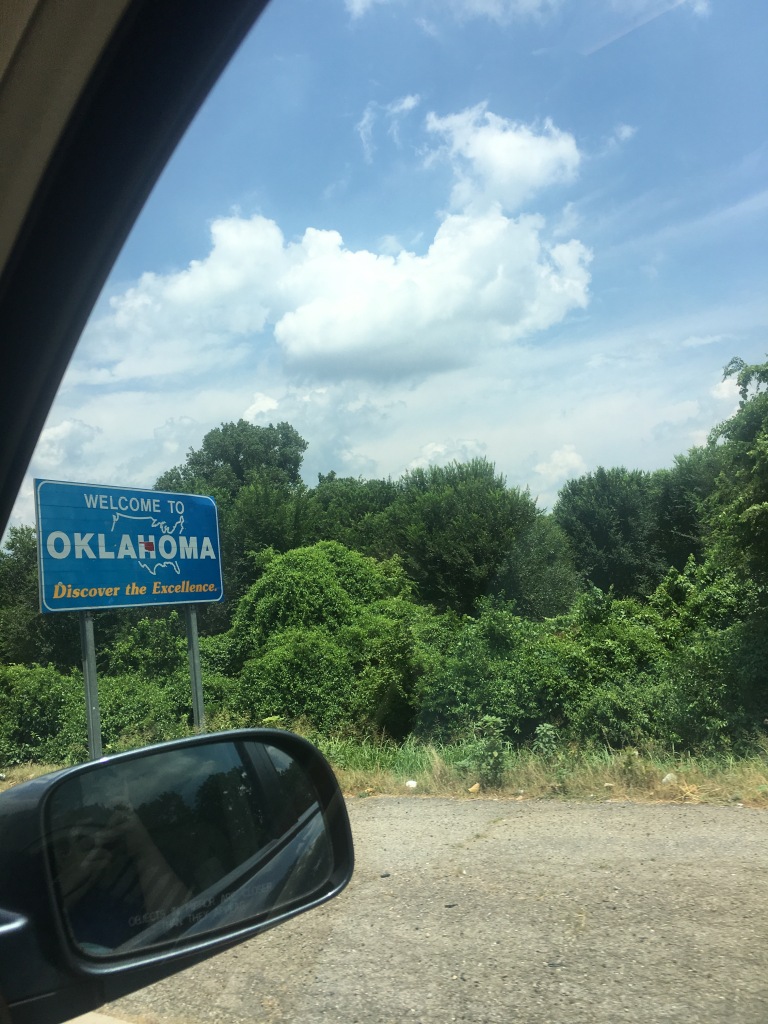 Little did we know as we waved goodbye to Ms. Margie, that just over the Oklahoma border, in a little town called Roland we would have a close encounter that was literally OUT OF THIS WORLD…

I almost had a wreck when I saw it. I slammed on brakes and skidded into the drive of a place called TheBOD.church. 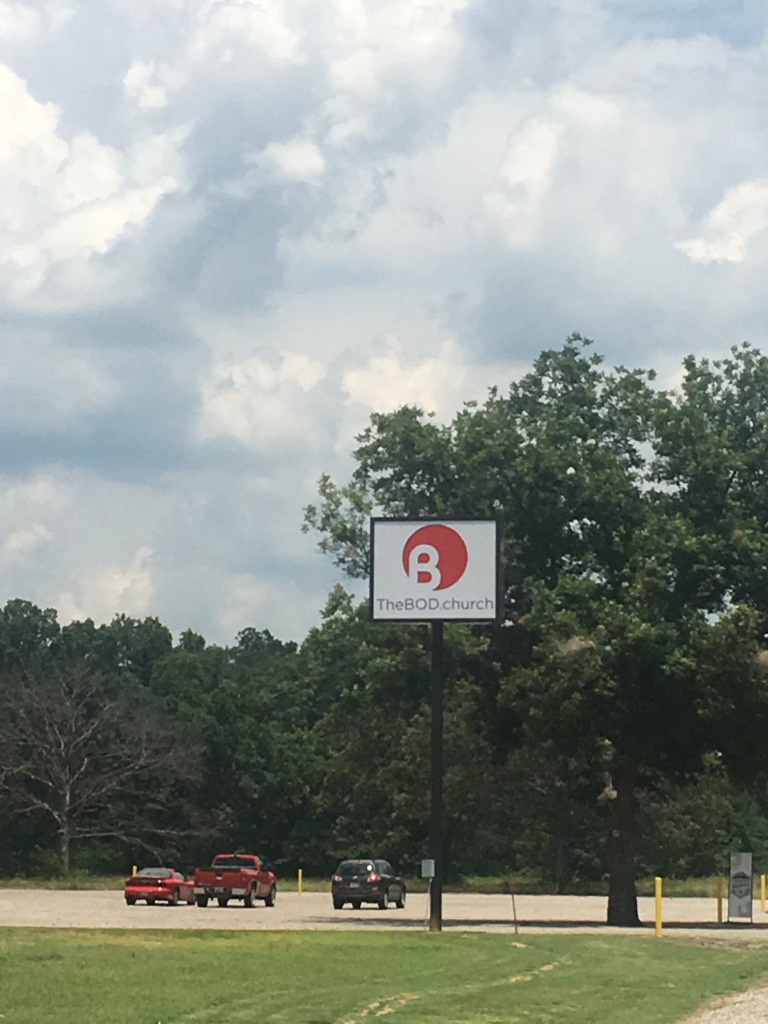 There was a tie fighter that had crashed into the ground right in front of the church! (I didn’t see the crash, but it had obviously just happened because there were no emergency vehicles there yet!).
My husband, Ellis, was a huge Star Wars fan and he passed that love for all things Star Wars on to the kids (Okay, I’ll admit it, I’m a fan too!) So I took some pictures of Eli with the tie fighter and then we went into the church to see what was going on.

There were four teenagers, Madison, Kim, Koty and Shawn, rocking out on stage in the sanctuary when we walked in. These kids were absolutely the coolest! Light simply radiated from them! They told us the church was starting a new sermon series on Star Wars. They let us take pictures with them in front of the fighter and then asked if they could pray for us. I was in tears as Koty prayed. Such a Spirit filled prayer from such a young person! It was an amazing encounter! Guys, have a great time at camp this week! We’re praying for safe travels for you too! 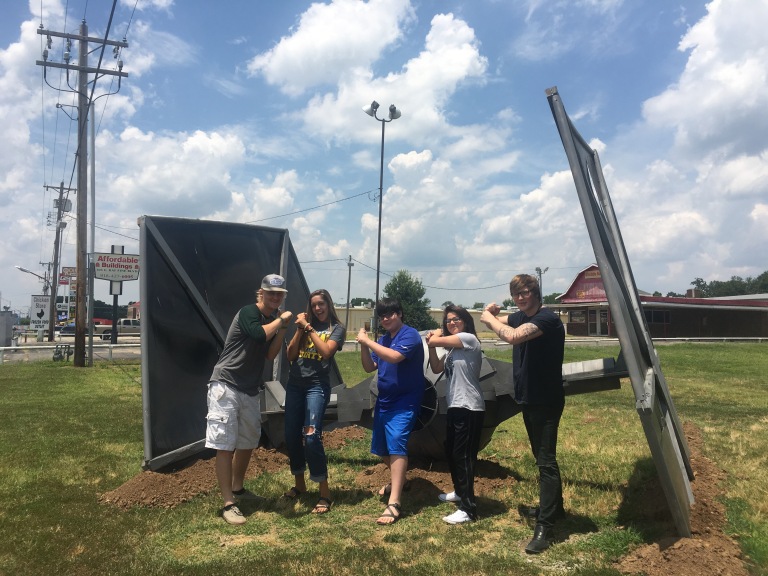 After hugs all around, we were back on our mission to “explore strange new worlds, to seek out new life and new civilization, to boldly go where no one has gone before!” (Yes, I know that’s from Star Trek, not Star Wars, but it fit, okay?!)

Today’s song of the day was Ellis’ theme song, The Imperial March. Ellis thought of  Darth Vader as a redemptive character in Star Wars. Vader did evil until the end of his life, when he received forgiveness and love despite all he had done…The Imperial March

Leave a Reply to Hank and Edie Cancel reply